Click here for a link to an interview I did late last year for the Italian comics magazine Scuola Di Fumeto. Thanks to Smoky Man, who did the original interview and posted the English translation. Above are some images from the magazine, which is very nicely laid out and puts most U.S. magazines about comic books to shame! And for those waiting for me to post new Tom Strong art, below is a commissioned piece I’ve never shown before. I’ll start previewing Tom Strong and the Robots of Doom here next month.

Comics Update
Again, hard not to feel like this all doesn’t matter all that much, but I thought I’d update folks on what’s going on with my comics work:

First, I’m happy to say that the Modern Masters book is finished. It only needs an introduction and final artwork approval and it’s ready to go to press. I found it very strange talking about myself in such detail for so long, especially since I get very nervous when in the spotlight. I usually hate interviews (excruciating!), but Todd Dezago (friend and writer of Perhapanauts) made it a fairly relaxed and fun process. Editor Eric Nolen–Weathington chose plenty of great pieces to illustrate the book, with the majority of the artwork never before published. I’m pretty happy with it. Hopefully the book will be out in late May or early June. Stay tuned!

Work continues on Tom Strong and the Robots of Doom. Still not sure if it’s okay to share artwork yet…soon! For now, I’ll just post some recent sketchbook pages. While doing the Modern Masters interview and attending the Toronto show I started to feel like a bit of a hypocrite as I advised aspiring artists to practice drawing and to keep sketchbooks–I’ve abandoned quite a few sketchbooks in recent years because I just don’t feel like drawing anymore in my free time. Time to get back into it and draw for fun again! I bought a nice new sketchbook and decided to start it off right with a decent finished drawing. I picked a couple of Tom Strong characters so I could get over worrying about what to draw and just went to town with pencils and some India Ink markers. The other page featured below shows the latest in my ongoing series of attempts to get a handle on drawing Superman, plus some hand and face doodles. I’ve decided I’m going to keep practicing these little “differently-shaped” faces so I can break my bad habit of choosing the same basic ovoid head shape every time I design a new character. 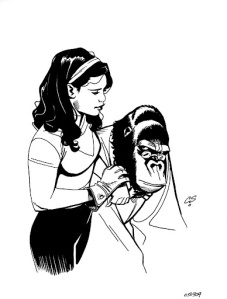 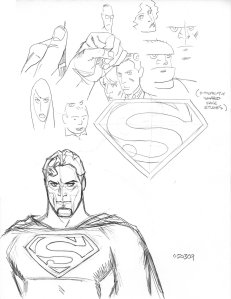 Finally, for those who frequent comic shops, here’s a little list of upcoming releases featuring my work:

-May 22- posted on-sale date for Modern Masters vol.21, although I will be very surprised if the book actually ships that soon

-June 3- the new Ocean trade paperback(with new bonus material), plus The Authority #12 with Part 2 of that Deathblow story

Photos
Nothing I can write won’t sound stupid and trivial after recent events, so for now, I’ll just post some recent photos (and one not-so-recent one)…

“Oh, how they danced…” (from our trip to Toronto)

The Belly-Girl and one of her birthday presents

This photo reminds me that I need to make more of an effort to keep in touch with my friends … (from l-r: Gary, myself and Steve in Old Town Alexandria from the 1980’s –thanks to Steve for digging this one up)