While finishing up Tom Strong and the Robots of Doom, I’ve done a few small jobs here and there. Below is the pencil art for the second Tom Strong Deluxe Edition (which collects Tom Strong issues 13-24 and features some bonus material), scheduled to ship in April of next year. Above is the pencil art for a couple of covers for the Wildstorm books WildC.A.T.S. and The Authority which form one single large image when placed side by side. I have no details yet on which issues will feature these covers or when they’ll hit the stands. I’ve posted the preliminary layout art for these covers on the art sales blog as well.
–C 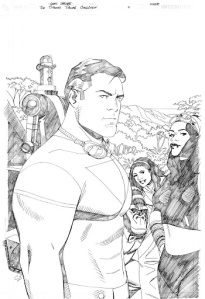 Mid-Ohio Con 2009
This year’s Mid-Ohio Con has come and gone, and now–weeks later–I’m finally getting around to doing a write-up on the show. Punctual as ever, that’s me! For the second year in a row, I started off the charity on-stage drawing sessions, first thing on Saturday morning. Then it was back to my booth for all-day sketching and signing. I saw lots of familiar faces and several new ones, but the day was incredibly busy and passed by very quickly! As usual, the fans at the show were universally nice and friendly, one of the reasons I’ve always enjoyed this con! Xan showed up after work and got to socialize and do a little shopping before we headed out to dinner with friends at Dirty Frank’s, a funky little restaurant in downtown Columbus specializing in really tasty hot dogs. Sunday saw me doing time all day at the booth again, busy enough that I never got to take a spin around the dealer’s room–rats! Xan threw in the towel around 3PM, finally giving in to her nasty cold. I ended up going to dinner at nearby microbrewery Barley’s with Renee Witterstaetter, Michael Golden, Steve Scott, and Joe Jusko. I stayed out too late, but I always love hanging out with Michael and Renee, and I haven’t seen Steve Scott in a dozen years, plus I’d never met Joe, so the night was interesting and lots of fun! Lots of tech talk, good food, good stories and general geeking out was had by all. I have no other convention appearances lined up for the foreseeable future, which is good, as I have lots of work to do this winter (finishing up the last issue of Tom Strong and the Robots of Doom and starting a couple of other neat projects), but I’m sure I’ll be back at Mid-Ohio Con next year and probably one or two other shows as well. In other news, the art sales blog is now finally up to date–I’m all out of Tom Strong pages after many years of carrying around that one last straggler from issue #35, and the unfinished pencil pages and prelims are almost all sold out. That’s okay–I’m making new ones every day! I’ll post new art for sale occasionally for the rest of the year, but I expect a huge amount of new stuff to be up early next year after Karl and I divide up the Robots of Doom pages. I still haven’t offered up any pages from my Spirit story or the Deathblow job from last year, but those should be up for sale at the same time as the new Tom Strong pages. This week, I’ve added the cover sketch for the second Tom Strong Deluxe Collection and the 2009 sketchbook as well–check ’em out!

Right: The Robot Monster gets in some pre-Holiday shopping on Sunday afternoon

The Sick of Moltar

Hey everyone! I have bronchitis! Truthfully, I was kind of excited to be diagnosed with bronchitis, because that meant I didn’t have H1N1. I’m on a regimen of huge doses of antibiotics and have the Chris Rock universal cure, Robitussin with codeine, so I’m going to go back to sleep in a minute since the fever I have is keeping me from being clever enough to write more than this paragraph. Chris is feeling pretty nasty too, but he’s as of yet undiagnosed. He seems to have a nasty cold, no chest stuff like me. Aside from the fun we had at Mid Ohio Con (my friend Steve Swanson let me read the Muppet News with him on his super cool podcast, the Muppet Cast! More info here or you can download the podcast on iTunes), I doubt we’ll have much to talk about until Christmas thanks to this dumb illness. We even postponed celebrating our wedding anniversary, which was October 2nd. 7 years! I’d be excited if I could just stop coughing!