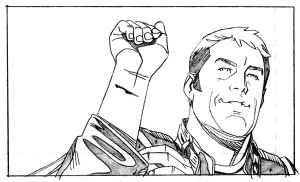 The first issue of DC’s new Human Target comic goes on sale today. This issue contains a five page short story by Peter Johnson (one of the producers of the TV series), myself and Karl Story. You can check out the story in its entirety (plus the cover and an introduction page by the book’s regular creative team) on the DC Comics website. Don’t let the free virtual pages keep you from buying the comic, though…

Also, don’t write nasty sarcastic comments on message boards about Chance’s scar being on the wrong side in my story…I’m well aware that I screwed up…!

Update:
Well, the stuff I wrote about Chance’s scar being on the wrong side in my Human Target story probably makes no sense to anyone who’s seen the printed comic. Apparently someone caught my goof and flip-flopped the offending panels. It looks a little weird in the final product, and they didn’t fix the panel with the knife on the third page, but it’s better than leaving it as it was. Above is the messed-up panel from the final page and below is the bottom part of the other page as I originally drew it, goofs and all!

Checklist
At some point very soon I hope to be able to start previewing material from Batman: The Return of Bruce Wayne #1, including my own cover (the Andy Kubert cover being shown all over the web is actually a variant cover), which is among my favorite of my own recent pieces. In the meantime, here’s something I stumbled across while cleaning some files and folders off of my computer this weekend: a checklist of my published work. I originally assembled this checklist at the request of Todd Dezago and Eric Nolen–Weathington for the Modern Masters book, but it was never actually published in the book (it may not ever have been intended for publication, but may have been meant only for use as reference for the interview and artwork selection). I should mention here that I was reluctant to include a couple of the items on the list because I just absolutely cannot stand to look at them and cringe at the thought of other people knowing about them, but I included everything because I know what it’s like to be a collector and a completist! I’ve also updated it to include the work published since the list was originally compiled a year ago. Hope this is of interest to somebody out there!
–C