Tom Strong News and Other Updates 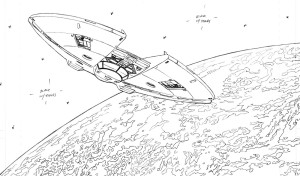 Newsarama.com posted an interview with me last week that centers on the future of Tom Strong (click HERE to read it), and I thought I should clarify some of the things said and update anyone interested on how things have shaped up since I spoke to Vaneta Rogers. The interview was conducted last Fall, immediately after the announcement that Wildstorm was folding. No one, including me, knew what was happening with any of the Wildstorm books then being published or scheduled for later release. If I seem a little unsure about things in the interview, it’s because I was! But that was months ago! I am now happy to reassure any Tom Strong fans reading this that DC will indeed be publishing Tom Strong and the Planet of Peril later this year. I’m still working on the series, so I don’t have any specific release dates yet.

In other comic book website news, two series I worked on made Comic Book Resources’ “Top 100 Comics of 2010” list. Tom Strong and the Robots of Doom came in at #90 (thanks to both reader Johnny Sarcastic and Tom Strong’s own Peter Hogan for alerting me to this) and Batman: The Return of Bruce Wayne was included with “The Batman Comics of Grant Morrison” as the #2 pick. My 2004 series with Warren Ellis, Ocean, was highlighted in CBR’s “A Year of Cool Comics” list. Writer Brian Cronin creates a nice little teaser for the series using pages from the comic–if you haven’t read Ocean yet, give the teaser a look and see if it catches your interest. A few other projects of mine also made the same list, including the Ambush Bug Nothing Special from 1992, Starman #14, and Global Frequency #8.

I received my complimentary copies of the Batman: The Return of Bruce Wayne Deluxe Collection last week, so I thought I should mention that that book is out soon–February 2nd, to be precise. It’s a very nice collection and features a sketchbook section in the back (including some layouts by writer Grant Morrison) as well as all the variant covers.

That’s all for now…

A few comics I’ve drawn have recently been released digitally (officially). They’re readable on iPhones, iPads, and iPod Touch models if you have the DC Comics app (available from the iTunes App Store). The following titles are available, each priced at $1.99:

If you’d rather read these comics on a larger screen–good news: comics you buy on your portable devices are available to view on your computer when you’re on the Comixology site! Click HERE to learn more.